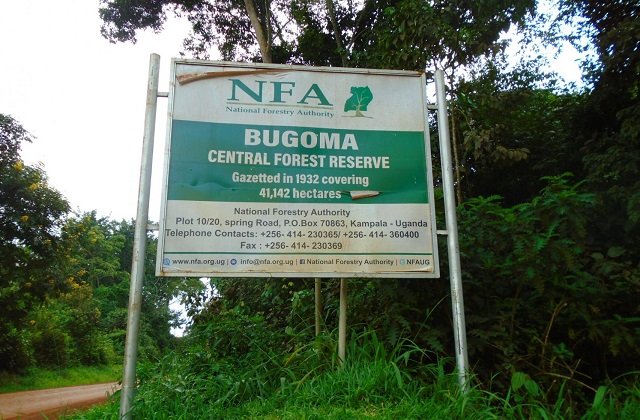 Bugoma Forest Reserve where the two chimpanzees were killed from in September 2021. Photo by Emmanuel Okello.

Yafesi Baguma 36, a notorious poacher and resident of Nyaigugu village in Kabwoya Sub-county in Kikuube district is in Police custody on accusations of killing two chimpanzees in Bugoma central forest reserve.

Uganda Wildlife Authority-UWA rangers in conjunction with the Police picked up Baguma from his hideout in Kakindo village in Kakumiro district on January 10, 2022, after killing two Chimpanzees. It is alleged that on September 27, 2021 Baguma together with three others raided Bugoma central forest reserve and killed two chimpanzees at Nyaigugu village in Kimbugu parish in Kabwoya sub-county.

The other suspects who are already on remand are Isiah Nabassa 27, John Tumuhairwe 22, and Erick Baseka 25. UWA’s Communication Manager, Bashir Hangi told URN in an interview on Wednesday that UWA rangers have together with the police been hunting for Baguma for the masterminding the killing of two chimpanzees.

He says that Baguma, who is currently being transferred to Kampala will appear before the utilities, standards, and wildlife court in charge of killing protected species. With the much deforestation of the Bugoma forest reserve, many protected species are found dead. Their death is associated with attacks by the neighboring communities.

This human-wildlife conflict is the biggest threat to conservation efforts in most of Uganda’s national parks with most areas being encroached on by the people due to the ever-increasing population.