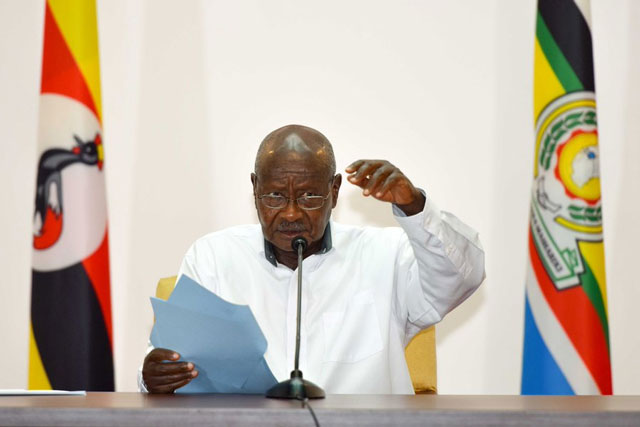 The family of late Joseph Ddumba Lukatome, one of the machete victims Lwengo district, say the condolence money released by President Yoweri Museveni never reached them.

Ddumba met his death at the hands of machete-wielding men who raided his home in Kakoma-Kyanjovu village, Lwengo sub-county on August 4, 2021.

His relatives say that the deceased’s family has never received the Shillings 10 million condolence, which President Museveni gave to each of the 26 affected families.

Richard Kayanja, one of the orphans to the deceased, says that although the money was released from State House it never reached them as the bereaved family members.

He narrates that the organizers who included the former Lwengo LC V Chairperson George Mutabaazi contacted them during preparations to meet the president.

He, however, says that the organizers let sideline the family and did not deliver the money.

Kayanja says that they have severally tried to reach out to Mutabaazi without success, something that has prompted them to complain to the Resident District Commissioner.

Maria Gorreth Nakimwero, the widow to the deceased says that her family was conned by the condolence money, which would support them, partly to recover from the loss of their breadwinner.  She says that they are currently struggling to fend for the family.

Vincent Kyaterekera Lutakome, a younger brother to the late Ddumba who is now taking care of the family, says that they expected the delivery of the condolence money shortly after the return of the beneficiaries from meeting the president.

However, to their dismay, they lost contact with the mobilisers. He says they now want the authorities to intervene and help the family recover the money from whoever pocketed it.

Herman Ssentongo, the Lwengo Resident District Commissioner, says that he was equally shocked to hear that money did not reach the intended beneficiaries.

He says that he reached out to Mutabaazi to give him a true account of the whereabouts of the condolence money he coordinated.

George Mutabaazi, the former Lwengo LC V Chairperson who led the victims to the President, says that to the best of his knowledge the beneficiaries received their share.

The latest complainants join the family of late Francis Ruhamyankaaka, which also came up last month demanding their condolence money after it emerged that it had been shared by the unscrupulous security officers in Lwengo district.