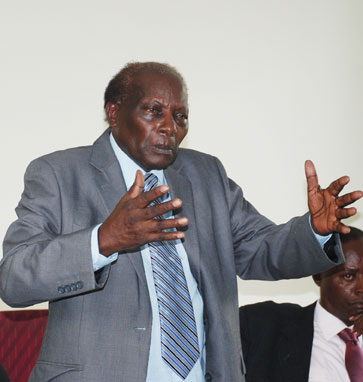 Retired Supreme Court Judge George Kanyeihamba together with five human rights activists have sued the President of Uganda Yoweri Kaguta Museveni for suggesting alteration of the law regarding  bail applications and release of suspects on police bond.

The other petitioners are;

Museveni  is sued jointly with his party National Resistance Movement and the Attorney General of Uganda who is accused of endorsing amendments on bail  and recommending for alteration of section 25 of the Police Act which  they say threatens the right to police bond.

The Constitutional  Petition stems from the remarks made by President Museveni on September 27th 2021 at the Judiciary Headquarters in regard to the issuance of bail to suspects on criminal matters.

According to his statement, Museveni told the judges who were attending the 4th Benedicto Kiwanuka Memorial Lecture that it is a provocation to grant bail to a capital offender and giving suspects bail is not a right.  Subsequently, Museveni added that he was to use political means to see that bail for capital offenders is scrapped off.

Now, Justice Kanyeihamba and his group, which says that they filed the petition public interest, contends that Museveni’s remarks are unconstitutional and contravenes several articles of the Constitution and International treaties to which Uganda is a signatory.

The group also attacks Museveni’s post on twitter stating that the law providing for bail application be altered, which to them is unconstitutional.

They further state that Museveni’s action of summoning the NRM party Parliamentary Caucus to discuss the alteration of the right to bail application is a threat to the said right and contravenes the constitution.

According to them, inflexible actions and attitude of the cabinet to endorse the memorandum of the proposed recommendation to alter the laws regarding bail application and police bond is unconstitutional and a threat to right for applying for bail. To support his case, the lead Petitioner who came to court physically being pushed in a wheel chair has attached a number of articles written by various media houses in relation to Museveni’s statements on bail and his speech at the recently concluded lecture to remember the former Chief Justice Benedicto Kiwanuka.

The retired Judge maintains that right to bail application is a fundamental human right which should not be tampered with although the Attorney General and government have the right to limit the fundamental Rights and freedoms.

Kanyeihamba through his lawyers of Centre for Constitutional Governance states that the alteration of the Right to apply for bail can only be done in line with the constitution and international laws.

Now they want Constitutional Court to issue an order prohibiting Museveni, the Attorney General, NRM party and any other person from furthering any of such actions that threaten the right to bail application and police bond.

This is not the first petition to challenge the proposed reforms on bail. On October 20th 2021, lawyer Male Mabirizi petitioned the High Court seeking to quash a memo reportedly written by the Attorney General Kiryowa Kiwanuka to change the law saying that a person should be charged in courts within 48 hours to only count 48 hours of working days of courts.

Mabirizi has since also filed another Constitutional Petition also related to the same.